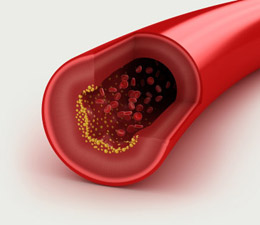 For all the ways bodies are harmed, by viruses, bacteria or trauma, the immune system has but one defense: inflammation. Even just a hard pinch will initiate swelling, redness, heat and pain. Specialized cells rush to the call, ready to engulf invaders, while others break down compromised tissue so yet others can rebuild, leaving it good as new. Sounds perfect, doesn't it? Yet many diseases result from the immune system in overdrive.

Take heart disease; once blamed on dietary fat it is now understood to be also about inflammation. Atherosclerosis" (hardening of the arteries) starts with a streaky deposit of cholesterol in an artery. The immune cells infiltrate the area to get rid of it, but instead attract more cholesterol, adding to the growth of the plaque. Eventually, complete closure or catastrophic loosening of the clot into the bloodstream could cause a heart attack or stroke. Since this all unfolds below the surface, doctors use diagnostic markers to reveal this disease before it's too late.

CRP as a predictor or heart disease risk

C-Reactive Protein is one of hundreds of molecules used in the immune process. Produced by the liver in response to infection or inflammation, and also secreted by fat cells, CRP usually spikes within 48 hours of an acute insult after which it dissipates. But in chronic inflammation, it remains elevated. For instance, people with gum disease have unresolved infection, inflammation, higher CRP levels and higher risk for heart disease.

Whether CRP itself is capable of causing disease or is just a marker is under study. A cost-effective, basic CRP blood test can be an indicator of possible inflammatory diseases including periodontal disease, cancer, infection, connective tissue and heart disease, pneumonia, tuberculosis, rheumatoid arthritis, lupus or vasculitis. Excluding women in the last half of pregnancy or those using oral contraceptives, there should generally be no detectable CRP in blood from a basic CRP test.

To determine an apparently healthy person's short and long-term risk of developing heart disease, the hs-CRP (high sensitive) test is often advised -- since it can detect CRP levels below those that appear with standard tests. The optimal range for highly sensitive hs-CRP test is under 1 mg/L; 1-3 mg/L indicates an average risk of a coronary event; over 3 mg/L indicates high risk; with levels continuing all the way to 20mg/L and greater, which indicates acute inflammation and the very highest risk of heart disease. At-risk patients can then be treated with preventive therapies such as aspirin and statins and/or the following lifestyle changes.

Not surprisingly, the same things that contribute to heart health are also helpful in reducing inflammatory markers, including CRP levels:

Heart disease was rare just 100 years ago. Therefore, this is an elective disease caused by our own lifestyles. Decreasing chronic inflammation and CRP could be one of the best ways to keep your immune system from turning against you.