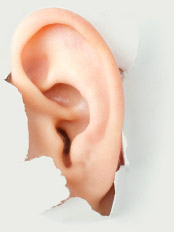 Often thought of as an ever-present ringing in the ears, the definition of tinnitus is much broader than this: some people hear ringing while others hear buzzing, whistling, roaring, clicking or hissing. The incessant sound may range from a low roar to a high-pitched squeal -- effecting either one or both ears. The resulting discomfort can range from a minor, occasional irritation for some to loud, never-ending, sleep-disrupting, emotional turmoil for others.

1 in 10 adults will experience tinnitus that lasts longer than 3 months while more than half of the population may have intermittent symptoms. Actually, tinnitus is not a disease in itself, but a condition where the brain's auditory system becomes disregulated: nerves in the ear fire inappropriately, producing the illusion of sound where there is none.

Much has yet to be learned but possible triggers of tinnitus include:

Although usually not a symptom of a serious condition, it's important that tinnitus be diagnosed and treated properly. There is no cure at this time but treatments are available that may help one to cope with the phantom sounds that are characteristic of tinnitus.

Depending on the severity, frequency, believed cause or type of tinnitus (constant, intermittent or pulsating), possible treatments include:

According to the ATA (American Tinnitus Association), Tinnitus is the most common disability effecting military personal and veterans. National Institutes of Health (NIH) studies indicate that noise and blast related damage to related areas of the brain and ear -- and especially to those suffering PTSD -- may contribute to tinnitus. More information about the NIH study can be found at http://clinicaltrials.gov/ct2/show/NCT01177137.

Avoid loud noises and head injuries, such as those associated with:

If you've had the symptoms of tinnitus for more than one week or if dizziness or hearing loss accompany the onset of tinnitus, consult with a doctor who specializes in diseases of the ears, nose and throat (otolaryngologist).